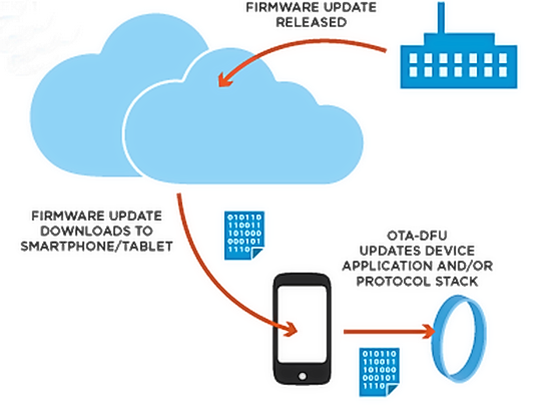 If you are looking for a place to get started with DFU, please have a look at this presentation here and the tutorial here.

In this post, we cover some in depth Q&A topics regarding Device Firmware Update.

A. What happens if something fails when doing DFU, would my device ever get bricked ?

B. How the vector table be forwarded when doing DFU ?

C. How do we do buttonless DFU ?

D. Why bonding could be an issue with DFU ?

E. How do I program the original application via programmer (JLINK), not by DFU bootloader ?

F. I can't debug the bootloader, why and what I need to change to debug it ?

G. How do I generate the Init packet or the init .dat file? what about the .zip file, and then the .json file ?

H. I use watchdog timer in my application, it triggers a reset when I jump to bootloader. How do I avoid that ?

I. Why do I find the address of bootloader is different from the default address ?

J. My application's size is too big to fit in dual bank update limit size. Where can I find single bank OTA DFU ?

K. I want my image to be signed, only authorized image can be accepted. Do you have any example ?

L. I'm using the bootloader from a pretty old SDK. Which DFU master tool I should use for that ?

A. What happens if something fails when doing DFU, would my device get bricked ?

There are several types of DFU:

B. How the vector table be forwarded when doing DFU ?

C. How do we do buttonless DFU ?

Buttonless DFU means we start the DFU mode from the application without the need of a physical button. The main technique is to set a flag, could be the retention register GPREGRET, or write to flash, etc. And then jump to bootloader either by a reset or directly branching.

Simplified approach: we can simply set a flag in GPREGRET and do a softreset (NVIC_SystemReset()) to get to the bootloader. Cons: No sharing bond information between bootloader and application.

Current approach: we still set a flag in GPREGRET to tell the bootloader to enter DFU mode, however, we don't do a softreset, but branch directly to the reset handle of the bootloader. The reason we do that is to utilize the use of sharing RAM between application and bootloader. If the connection between the device and the central is paired and bonded, we will share this bond information between the bootloader and the application via m_peer_data that located in the noInit RAM area by a SVC function: dfu_ble_svc_set_peer_data().
After that the bootloader will use the shared bond information to re-encrypt the link when the central connect to it. Note that since we jump directly to bootloader's reset handle, we don't need to reinitialize the softdevice.

The commands to tell application jumping to bootloader, and how to integrate the buttonless DFU is available in the documentation here.

Side note: If you use SDK v7.x and want to test buttonless example with gcc compiler, it may not work. The assembly code to branch from application to bootloader was made for KEIL only. You would need to copy and replace the code in StartApplication() function in bootloader_util_gcc.c in SDK v7x with the code inside bootloader_util_reset() function (with macro for GNUC) in bootloader_util.c from SDK v8.0 or later. You may need to add "-fomit-frame-pointer " into your GCC compiler option if the linker complains about "error: r7 cannot be used in asm here".

D. Why bonding could be an issue with DFU ?

There are 2 solutions to cope with this:

E. How do I program the original application via programmer (JLINK), not by DFU ?

After you flash your bootloader, the next step is to program the application via the bootloader DFU mode.

However, doing DFU usually take more time (and hassle) than programming via Jlink programmer, both when developing the firmware and when in mass production. DFU is more for bugs fix and firmware version upgrade on end products.

The reason directly flash the application firmware via JLink programmer won't work when there is a bootloader is that there is a flag (bank_0 in p_bootloader_settings ) stored in flash ( BOOTLOADER_SETTINGS_ADDRESS = 0x0003FC00) to tell the bootloader if there is a valid application at bank 0 or not. By default it's 0xFF = BANK_INVALID_APP. We need to set it to BANK_VALID_APP = 0x01.

There are several ways to do it:

The .hex example on the above link sets the CRC flag to 0x00. You can also use programmer to write directly as how we do it with the BANK_VALID_APP flag. The hex file was created while we use the bootloader in SDK v6.x, in that version in the structure of bootloader_settings_t, each field is 32bit. On SDK v7.x and later, we uncheck the option "Enum Container always int" in C/C++ setting and that cause the enum only occupies 1 byte. It will mix with crc in one word as showed in the figure by testy in the first comment below.

Note that the current implementation of the bootloader on SDK v8.1 doesn't store CRC of the image it flash on bank 0 to flash, 0x00 is stored in the CRC field, meaning there is no CRC check when the device booting up. It's up to you to modify the code to store CRC to flash (look for m_image_crc in the code).

F. I can't debug the bootloader, why and what I need to change to debug it ?

Please have a look at this answer.

G. How do I generate the Init packet or the init .dat file? what about the .zip file, and then the .json file ?

To know how to generate the .dat and .zip file, look at this well maintained guide here

The reason we need a .zip file is that we don't want to send the binary and the init data file separately, especially when we may have 2-3 files need to be transferred. So we use a .zip file for it.

Note that on MCP v3.9 we can select the hex file directly, the .zip will be automatically generated. And the auto generated init file is a generic one, which accept any softdevice, no application revision number, etc.

H. I use watchdog timer in my application, it triggers a reset when I jump to bootloader. How do I avoid that ?

When you jump to bootloader, either by issuing a softreset (NVIC_SystemReset) or branching, the WDT is not stopped or reset.

If you want to keep the WDT running when in bootloader mode, you would need to keep reloading the WDT with RR register inside bootloader.

Another solution is just to let the WDT run off to trigger a reset instead of doing a softreset when in application. However, this way needs a long delay in the application to wait for the WDT to run off. Also, retained register and RAM will be cleared when doing WDT reset, so flags, bonding information if any should be stored in flash.

There is a quicker way of doing it is to set the system in SYSTEM OFF and wake it up immediately. Waking up the system from SYSTEM OFF won't reset the WDT but entering SYSTEM OFF does. To wake the chip from SYSTEM OFF instantly we need to set DETECT signal to active. This can be done by simply configure a GPIO pin with SENSE level low and a pulldown for example.

I. Why do I find the address of bootloader is different from the default address ?

J. My application's image is too big to fit in dual bank update size limit. Where can I find single bank BLE DFU ?

At the beginning when we was implementing DFU bootloader with 2 transportation options: OTA and Serial (UART), we assumed that Serial is more reliable than OTA and there might be a risk to do single bank update with OTA DFU.

However, BLE is a reliable protocol, there should be no packet lost otherwise re-transmission will cause the link to be timed out. And as discussed at #A, if there is a glitch when transferring the image, the device is not bricked and can do a retry on DFU.

I think it's relatively safe to do single bank update via BLE. The risk is the same risk as doing Softdevice/bootloader update.

In our current SDK single bank OTA is still not available. However, on SDK v8.1 you can simply replace the file dfu_dual_bank.c with file dfu_single_bank.c and you can have single bank BLE update.

In previous SDK (before SDK 8.1) simply replace the dfu_dual_bank.c with dfu_singIe_bank.c won't work out of the box. Some further modification needed. I ported one pretty long ago, based on SDK v6.0. The principle should be the same, you should be able to port the bootloader in the latest SDK example.

K. I want my image to be signed, only authorized image can be accepted. Do you have any example ?

We have an experimental DFU with signing provided from SDK v9.0 at \examples\dfu\experimental. The documentation and source code is provided in that folder.

Also there is another example on github.

L. I'm using the bootloader from a pretty old SDK. Which DFU master tool I should use for that ?

We will try to keep this blog updated with more Q&A, please leave your questions in the comment.