How we build ThingyWorld for embedded world 2020

When we wanted to show off our favorite prototyping platform, the Nordic Thingy:91, at last year's embedded world in Nuremberg, we discovered that because of the high volume of devices at the tradeshow, the TCP packets our Thingys were sending on the NB-IoT network were dropped. To be fair NB-IoT are not designed to be used for TCP and this can be considered a compatibility hack to simplify development with devices that need TCP and TLS end-to-end secure connections. For production deployments UDP should be used in NB-IoT networks.

To have a better experience in 2020 we needed to used UDP to be able to send real-time updates from the trade show floor—at least with a high probability of them reaching the cloud where the data is consolidated and visualized. But because nRF Connect for Cloud, which is based on AWS IoT Core, only supports TCP+TLS we needed an alternative way to connect the devices.

We decided to modify the existing asset_tracker example from our nRF Connect SDK so it sends the messages intended for nRF Connect for Cloud MQTT broker to an UDP proxy instead. To simplify the communication we decided to not authenticate the devices any more and only use the IMEI of a device as an identifier. This removed the need for flashing certificates to devices and associating them with an nRF Connect for Cloud account; this is the task of the proxy server.

The proxy server (written in Node.js and running on an AWS EC2 t2.micro instance) listens for incoming messages in the format <device id>:<JSON payload> and registers an nRF Connect for Cloud device on demand for devices that haven't sent messages in before. This has serious security implications, but for a demo use-case this turned out to be a great solution.

We sent out one firmware hexfile to our field application engineers and within hours we had thingies connecting literally from all over the world, because all they needed to do was to flash the hexfile, and turn on the Thingy:91. The proxy was then taking care of the rest. 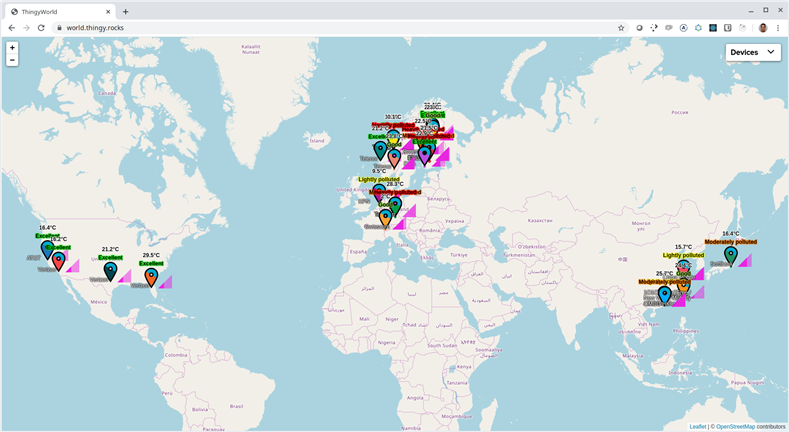 The incoming data is forwarded to nRF Connect for Cloud where it arrives as if the device had sent the message directly: 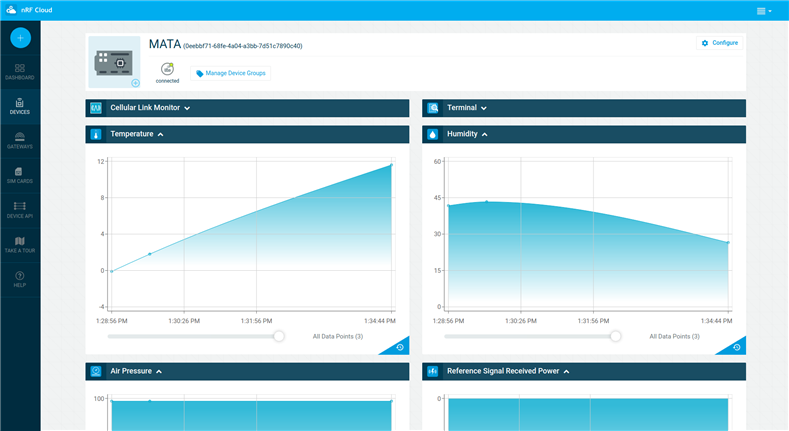 In addition it is sent directly to the WorldMap that the proxy is hosting, using a websocket connection so real-time updates appear on the map. This enabled us for the the first time to visualize signal strength properly and to highlight the air quality feature of Bosch's BME680 which calculates an Air Quality Index based on multiple environmental sensor readings.

We also prepared for the fact that the Thingys on the trade show floor won't be able to acquire GPS fixes because they would be indoors, so we let the proxy resolve their cell locations using locationapi.org. Devices show up on the map with a circle to indicate that their location is approximated using their cell information: 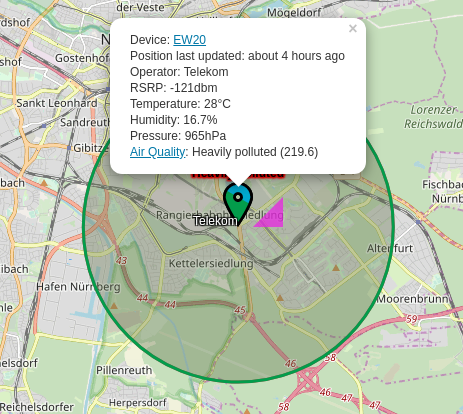 This demo also helped us to showcase the variety of network operators that already support the nRF9160 all over the world.

We won't keep the proxy running after embedded world 2020, but you can check out the ThingyWorld any time, it serves a static snapshot of the device data from the last conference day: https://ew20.world.thingy.rocks/.

We won't release the demo into our SDK because it is not an example that should be widely adopted, it works well for a demo like this with a limited lifetime but is not secure and the protocol still has a lot of overhead.

Nevertheless you can download the source code for the asset_tracker application with the UDP backend from here, and you can checkout the fork of fw-nrfconnect-nrf with the modifications here.

The proxy server source code can be found here.