LE Audio through a technical lens

The highly anticipated nRF5340 Audio Development Kit and nRF Connect SDK software module is finally available. On that occasion, I am writing this blog post to quickly get everyone up to speed on the most important features and aspects of Low Energy Audio!

The word 'Bluetooth' has for a long time been synonymous with wireless audio playback - it is the de facto standard that almost every wireless audio device conforms to, and it has been for the last decade. Today, the Bluetooth that is used for audio transfers to headphones and speakers is the Bluetooth Classic protocol, not to be confused with the Bluetooth Low Energy (LE) protocol.

The higher throughput and audio quality is why Bluetooth Classic has been the go-to protocol for wireless audio transfer, up until now! As we shall see later in this blogpost, it is now possible to get that same audio quality through Low Energy Audio at a fraction of the power consumption - with additional features enabling a wide range of entirely new audio use-cases.

In essence, the addition of Low Energy Audio to the Bluetooth Low Energy specification signals the beginning of a new era for wireless audio!

If you want to read more about the differences between Bluetooth Classic and Bluetooth Low Energy, check out this Get Connected blogpost.

The new features can be summarized as follows:

So, in essence, it seems everything is better with LE Audio... but how can this be? This is all made possible by the powerful combination of the new Isochronous channels and the Low Complexity Communications Codec (LC3). Let's dive into the technology!

From a technical aspect, it is the addition of the LE Isochronous Channels to the Bluetooth Core Specification v5.2 that enables the Low Energy Audio transfers. The LE Isochronous channels are a pillar of the new audio standard.

Previously, the Bluetooth LE protocol has always ensured that all sent packets successfully make it across the link through acknowledgements. If a packet is not acknowledged it is either re-sent until successful or the connection is terminated. The Isochronous Channels enable discarding packets that are no longer relevant - which is often the case in an audio stream where a 'late' packet has no use for the receiver. This is done by limiting the possible retransmission time for a packet, to guarantee it is still useful to the receiver.

The Isochronous Channels also enable the synchronization of multiple audio streams from the transmitter's side. In practice, this is most useful for making True Wireless Stereo (TWS) possible by having synchronized, individual streams for the L- and R-channel of the audio that each earbud/earpiece can tune into.

Basically, the Isochronous Channels implement the transport of the audio streams, and so all that is missing is the content of the streams; let's take a look at how that is generated!

Generating an audio stream might seem straightforward, but things get a lot more complicated when you add compression into the mix. The compression is vital in a low-power application since it directly affects the required throughput, which primarily affects the overall power consumption.

Compressions and decompression will hereafter be referred to as encoding and decoding respectively since this is what a codec does to the audio stream. In one end it is made smaller by encoding it to a non-playable stream of bytes which is more effective to transfer, and then it is expanded again into a playable audio stream on the receiver side by decoding the received encoded signal.

There exist many different audio codecs to choose from, and the choice of codec will largely affect the performance of your application. The selected codec will affect the device's processing needs, power consumption, the audio stream's end-to-end latency, and the received audio quality. The quality of the chosen codec is therefore paramount to your wireless audio application.

The Low Complexity Communication Codec (LC3) is mandatory in the LE Audio specification, meaning every LE Audio-certified device must have the LC3 present to ensure interoperability with all other LE Audio devices. For completeness, it is also worth noting that the LE Audio specification allows the devices to switch to another codec if both devices in the connection support it, but the LC3 codec must always be available.

It is however not without reason that the LC3 codec has been designated the mandatory codec of the new wireless audio era, so let us take a closer look at the specifics of the LC3 codec!

This section is largely based on the LC3 and LC3plus research paper. If you are already familiar with how audio codecs work and would like to know more about what is happening under the hood of the LC3, I highly recommend taking a look at the paper.

The development of the LC3 codec was focused on high-quality audio with low latency and low computational complexity, optimized for speech and music. They wanted to create a codec that could be used for all devices ranging from hearing aids to HiFi headphones with the overall goal of achieving a 50% reduction in required throughput for on-par audio quality when compared to legacy codecs. Spoilers: they managed to achieve this goal, and not only that!

The broader configuration options of the LC3 in regards to bit-depth, sampling rate, and frame size also make it shine brighter since this makes it applicable to a vast range of audio applications. The LC3 takes advantage of the increased processing power available in modern chipsets and utilizes it to compress the audio stream more effectively while performing packet-loss concealment on the fly if the need should arise, creating skip-free, high-quality audio streams.

The output size is of course not everything when comparing codecs, for how good would a codec really be if it maximized its compression at the cost of tarnishing the audio quality? The BT SIG, therefore, conducted an audio quality comparison test between the SBC and the LC3, and the results of these tests are summarized in the following graph: 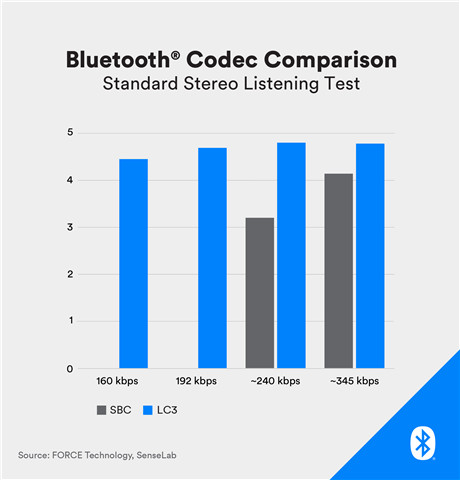 As we can see, the LC3 provides a better perceived audio quality than the SBC on all the same bitrates - even with the low bitrate of 160 kbps. Looking at the scores given in the listening test conducted for the LC3 and LC3plus research paper we see that the perceived audio quality of the LC3 at 124 kbps actually rivals that of the test's uncompressed reference!

Still not entirely convinced? Head over to the BT SIG to hear for yourself in their Audio Codec demonstration!

NOTE: Make sure to use a non-Bluetooth speaker/headset when listening to the demonstration.

A huge part of LE Audio adoption will, of course, depend on its availability in smartphones. Unfortunately, there have yet to be any public announcements from Android / iOS about definitive timelines for adopting LE Audio, so there is not much that we can say for certain at this point.

However, there has been a lot of activity on the biggest Android developer blogs regarding LE Audio adoption recently, as well as these LC3 related commits to the AOSP, which indicates that it is all but certain to become available in Android 13!

The practical availability of LE Audio for end-users will also require that the smartphone is hardware compatible with LE Audio.

To end this barrage of good news, we just released our LE Audio DK and nRF Connect software module. You are all set to start exploring all the new possibilities made possible by LE Audio, happy development!