There are lots of improvements in nRF52 compared to nRF51. Features that are the same in both products are not mentioned here, only changes worth mentioning will be described. It is expected that you have prior knowledge of nRF51 so that you are able to judge the improvements.

nRF52 has an ARM Cortex-M4F processor which is very powerful as compared to ARM Cortex-M0 on nRF51. For simplicity we will use M4F and M0 from now on when be talk about just the CPU alone inside the product.

Both of them are 32-bit microprocessors but M4F has a higher performance per clock design, powerful digital signal processing (DSP) instruction set, and floating point capability. All of these mentioned features will provide the computing performance needed for the broader wearable and IoT industry.

The DSP and single-precision floating point capability of the M4F further increases its desirability for use in wearable and IoT devices. The ability to perform single-instruction multiple-data (SIMD) operations, single-cycle multiply accumulate (MAC) instructions, and floating point operations using (FPU) without calling complicated subroutines enables efficient processing and control of digital signals from the many sensors used in these systems.

What does "higher performance of M4F per clock design" mean?

M4F in nRF52 runs at 64MHz as compared to M0 in nRF51 which runs at 16MHz. Clocking CPU with higher speed means applications are able to finish their tasks faster, but it also means higher consumption of power per second. So it is very important to compare CPU's per MHz performance.

This shows that M4F is 45.9% ((3.40-2.33)/2.33) faster at executing instructions per second than the M0 (2.33 CoreMark/MHz).This means that if they are running at the same clock frequency the same task can be done 46% faster in M4F and allows the device to quickly go back to a lower power sleep state. In embedded systems that is a lot of power saving, because your battery that lasted for a year for your product might now last for a year and half just by changing CPU from M0 to M4F and keeping everything else exactly same (including CPU clock speed).

nRF52 can have as much as 512KB of Flash as compared to maximum of 256KB on nRF51. The page size is also increased to 4KB from 1KB. This is an important thing to note and because of this increase, the flash operation per page will take longer time.

On the nRF52, the NVMC (Non Volatile Memory Controller) is used for configuring and controlling flash, FICR, UICR and Instruction cache (I-Cache 2048 bytes).

In UICR, CLENR0 is removed as you use MWU to partition memory into regions. RBPCONF has been replaced by APPROTECT (more on this later).

Even though I-Cache is a different memory technology, it is controlled and configured by NVMC as this cache is only used for code residing in flash.

Cache will use some current when enabled. If the reduction in average current due to reduced flash accesses is larger than the cache power requirement, the average current to execute the program code will reduce. When disabled, the cache does not use current and does not retain its content.

nRF51 supports a maximum of 8 RAM AHB slaves with 4KB of RAM section connected to each slave. So the maximum RAM size a product could have is 8 * 4 = 32KB.

To know how much RAM is implemented on your chip, you need to read product specification for your chip revision.

RAM contents are lost when the system loses power, but the contents can be retained in System OFF mode and this is configurable in POWER.RAM[n] register for each available RAM slave.

ARM-Cortex M4F has an MPU in itself. Documentation and software support for ARM MPU is not part of Nordic releases.

Also the readback protection on nRF51 (configured through RBPCONF in UICR) is replaced with APPROTECT. The difference is, with APPROTECT you either block ALL or NONE of the CPU registers and memory mapped addresses (APPROTECT.PALL). This means that if APPROTECT.PALL is set, then debugger is blocked to access any (CPU and peripheral) registers. This is done to add extra layer of security for those who want to protect their firmware IP.

The new BPROT module in nRF52 can be configured to protect flash memory block each of size 4KB against any write and/or erase operations. CPU will hardfault in case any attempt is made to erase/write protected blocks. It is worth noting that the settings in this module are cleared at system reset, so it is up to the firmware to configure this module at early stage of system boot up.

Instead of internal RC oscillators, nRF52 is based on PLL to provide better accuracy and stable system wide clock.

By default, the PLL will start in open loop mode with 32MHz clock output until the externtal crystal (only 32MHz XTAL is supported) is started and stable. The PLL will then gradually change frequency to match that of the XO and generate a CLOCKREADY event when PLL is locked and starts to operate in closed loop mode. This means that the clock will always be provided by PLL (either in open loop mode or locked to external crystal oscillator). In addition to the HF clock output clock frequencies available on nRF51, HF clock controller on nRF52 provides 64MHz CPU clock and 32MHz peripheral clock.

This is same as in nRF51 including calibration mechanism.

Each TEP implements a fork mechanism that enables a second task to be triggered at the same time as the task specified in the TEP is triggered. This second task is configured in the task end point register in the FORK registers groups, e.g. FORK.TEP[0] is associated with PPI channel CH[0].

This means that event connected to CH[n].EEP will result in two tasks (CH[n]TEP and FORK[n].TEP). The fork mechanism is enabled by default and is not configurable. It will not have any power consumption penalties if FORK features is not used because this is just a copy of CH[n].TEP. 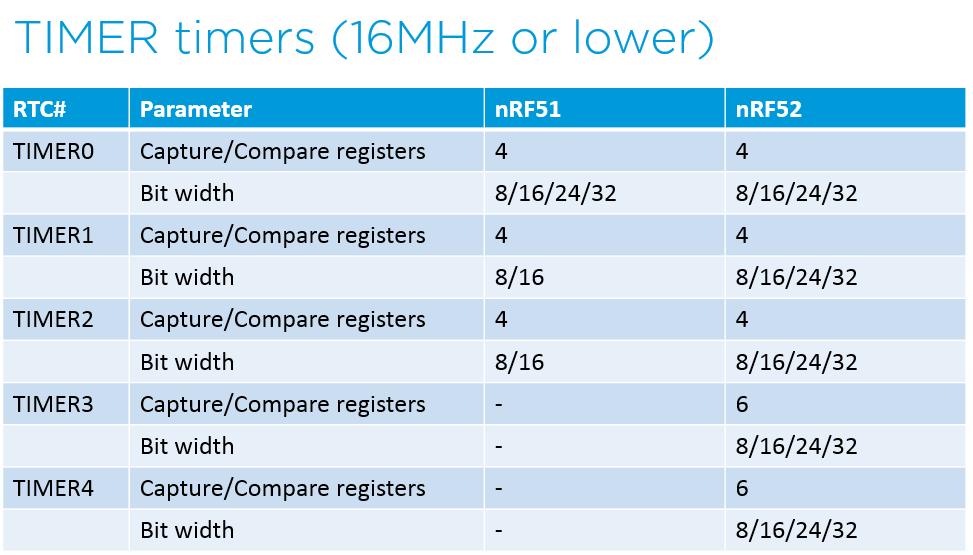 Using prescaler, you can use 16MHz or lower frequency for TIMER ticks.

Using prescaler, you can use 32KHz or lower frequency for RTC ticks.

This image is giving a lot of information but I have learned that it is confusing for some. So I will try to explain what it is. There are four serial instances on nRF52, which have their own register address space. It is only possible to have one module using an instance at a given time. For example, SPIM and SPIS cannot use the instance SERIAL0 simultaneously.

Below are some of the common things between them

The documentation given is very detailed. To help you understand the examples given in the documentation, I will create a different blog to explain them in detail (when i find some time) and link it here.