The embedded world trade fair presents itself as the leading trade fair for embedded systems. It allows the embedded community to get information about new products and innovations. But also allows us to exchange information and maintain and develop connections with our customers and partners. This year was the first after several years of cancellations. We were very much looking forward to getting out and meeting you again. For those of you who could not attend or did not want to, we have looked at what is interesting. That “we” means Robin Saltnes and Finn Boetius, Product Marketing Engineers at Nordic. This blog lists some of what we saw, and we’ll also link to a video that we made, which includes a video for most of what we are writing about here. This blog is in no way comprehensive, and we probably missed a lot of exciting things. If you think we missed something interesting or want us to check out something specific next time, let us know in the comments (we actually read those and respond).

After entering the trade fair and grabbing one of the fancy Nordic tote bags, we went on a hunt to try and find the booths we were interested in. The first on our list were Bosch, Rohm, and Analog Devices. Most sensors on the Thingy:53 came from one of these companies and were all close together in hall 4A (hardware, systems, distribution, services). 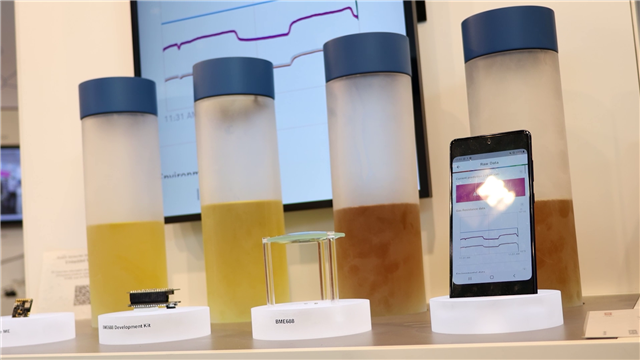 Bosch had probably our favorite demo (in spite of not involving Nordic products directly) involving a barometric pressure sensor attached to a little Lego figurine that could tell which story of the Lego house the figure based on changes in the barometric pressure. The sensor can detect the difference in pressure, just by varying the height a couple of centimeters. If you have a look at the picture of that demo you’ll see how impressive that is. The demo for the BME688 environmental sensor for temperature, humidity, air quality, and air pressure, which happens to be in the Thingy:53, was several big cylinders of drinks with increasing alcohol content. By putting the sensor into the different cylinders, it could tell if it was a non-alcoholic, slightly alcoholic, or a drink with higher alcohol content, just from the air in the cylinder. We got to play with it a little and could not get it to mess up the results; sadly, we were not allowed to taste the beverages. Here is a Bosch tweet about both demos: BME688 and BMP581 Tweet.

Right next to that, we found Rohm with cool demos, but nothing involving the BH1749 color and light sensor we were hoping for, which is the sensor in the Thingy:53. It can sense RGB and even Infrared light. The intended use case is adjusting the LCD backlight of TVs, but we are sure you can come up with more innovative uses involving the Thingy:53. A big plus on the booth was the friendly staff and the fact that they had ice cream.

Next up, we met with Jan Jongboom from Edge Impulse at our Nordic booth to unbox the Thingy:53. We discussed the super cool machine learning possibilities using the Thingy:53 in combination with Edge impulse. If you did not already know, the Thingy:53 comes precompiled with an application that lets you do machine learning on the edge. Jan promptly unboxed the Thingy:53 and had a basic pattern recognition example running on it within 3 minutes. You can have a look at the video here:

At this point, this blog likely reads like a Thingy:53 advertisement. That is not what we are going for, sensors are just fun to play with and the Thingy:53 is pretty awesome.

At the Zephyr booth, we met our friends from Golioth with several impressive demos. An OpenThread demo involving three Laird BT510 nodes and a Raspberry Pi with an nRF52840 dongle as Border Router. The demo nicely showcases the data management and OTA firmware upgrades Golioth is well known for. They also have a demo based on our Thingy:91s asset tracking capabilities and built a dashboard to visualize the date from Thingy:91s they took on their journey through Nürnberg. To have a deeper look and even the demo code for some of the applications, have a look at their blog.

At the same booth, we met our colleague from Nordic, Ali, who was there presenting our new nRF5340 Audio DK. He had an Auracast

(Bluetooth LE Audio Broadcasts) demo running, broadcasting audio to multiple devices simultaneously. He had also built a brand-new demo for streaming audio from one kit to another. At this point, we discovered we could use our Audio DKs instead of our wireless microphones. So obviously, we used the Audio DKs for all future interviews. As it turns out, the battery lasts the whole day, streaming audio. If you're interested in the code he used, it is nothing official, but you can download it here on Rick’s GitHub. Rick is the Nordic Software Engineer in Taipei that wrote the original demo.

We went on and found another Thingy:91 at Nowi’s booth. They built a plugin board using their energy harvesting PMIC (NH2D0245) to make the Thingy:91 energy autonomous. You might have read about that here on DevZone. Also, check out this short video they made about the board: Nowi Powered Energy Autonomous Nordic Thingy:91 Platform - YouTube.

At Memfault, we had a talk with Heiko Behrens about the importance of fault analyses, remote debugging, and other services Memfault offers in development and during production. Here is an excerpt of what Heiko had to say:

At the Ignion booth, we discussed the challenges of designing IoT antennas. Ignion has designed the antennas on both our nRF9160 DK and the Thingy:91 that work for GNSS and cellular at the same time. They also built this useful online design tool to assess what kind of antenna you need on your PCB.

We then went on to Fraunhofer, the organization behind the Low Complexity Communication Codec (LC3), in the hopes of finding a Bluetooth LE Audio demo. We did see an audio demo, but it was related to car entertainment systems. As they explained, it could buffer and switch between analog and digital radio to switch seamlessly depending on which signal was better. We also saw an energy harvesting demo at their booth, where they used a piezo crystal to generate enough energy from vibrations to use Bluetooth LE.

While passing through the Arm booth, we met with the IoT creators, who were teaching willing participants how to use the Thingy:91 and giving them away. If you didn’t hear about it they were also the ones giving away 1000 (yes a thousand) Thingy:91s earlier this year: 1000 Devkits Giveaway – iotcreators.com. 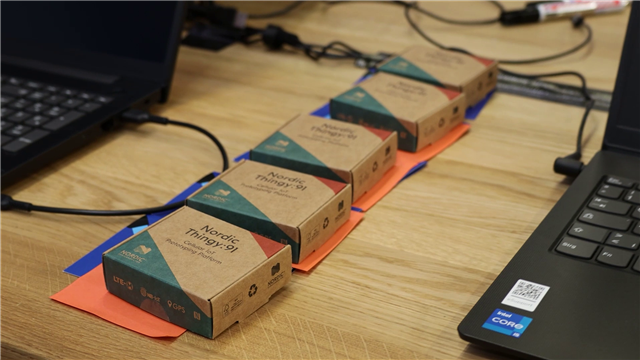 In conclusion, there was a lot to see and we didn’t get to record even half of it but it was a diverse and rewarding trade fair. Our favorite part was definitely the random encounters along the way with enthusiastic developers working with our SoCs and SiPs. We even agreed to send out some Development Kits in return for promised projects and are very much looking forward to seeing the amazing results. See you next year!